Need to know the weight of your ship or how level it’s sitting in the water? Now there is an app for that.

Structural monitoring company Weir-Jones has released a new version of its automatic draft indicator system, or ADIS Version 7, which sends information on a vessel’s trim to Android and Apple smart devices in real time, cutting down on how long it normally takes to relay that information and allowing remote access of those data. 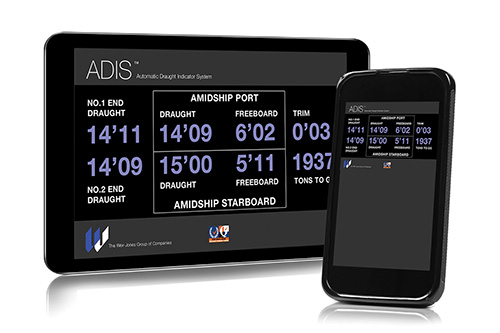 “One of the features that we’ve added to ADIS now is the ability for the master or owners or stakeholders in general to be able to have data from ADIS fed to a hand-held device, a tablet, a smartphone,” said Lincoln Bodner, marketing manager for Weir-Jones, based in Vancouver, British Columbia. “The captain of a containership can now actually monitor his loading operation and not be bound to the bridge while he’s doing it.”

The intention of this effort is to allow the person in charge of ensuring a vessel’s safety to be “in a better position to make safety-related decisions on the fly as it’s happening in real time,” he said.

Real time is important to ADIS customer Capt. Bill Hughes of Washington State Ferries. Each of his vessels has to be weighed before it can leave port, per Coast Guard parameters. But that weight constantly shifts as passengers load their cars onto the ships. Hughes has to balance putting as many customers on board as is safe while making sure his boats aren’t too heavy. In addition, time is of the essence to those on board the ferries, Hughes said.

“When we’re looking at the regulation enforcement part of it, if we have some issues happening on some vessels where there are failures happening of some sort, it takes about five to seven minutes each trip (to assess them),” said Hughes. “And if you multiply that out … some of our runs have 28 to 30 departures a day. And a run has got a 15-minute crossing, and you have a half-hour turnaround.

“It may not seem like five minutes being a big deal, but when you have cruise ships leaving port at a certain (point) of time, when you’re doing mass transportation with people with bus schedules, commuter connections for trains, buses, planes, (then) five minutes can make or break you. So it’s a huge, huge reduction in time for us.”

Before Washington State Ferries began using ADIS about 10 years ago, Hughes said the weigh-in task was manual. His company uses a version of ADIS that Weir-Jones modified for the company that provides pre-load notifications, so he’ll know if a vessel is getting close to the over mark. 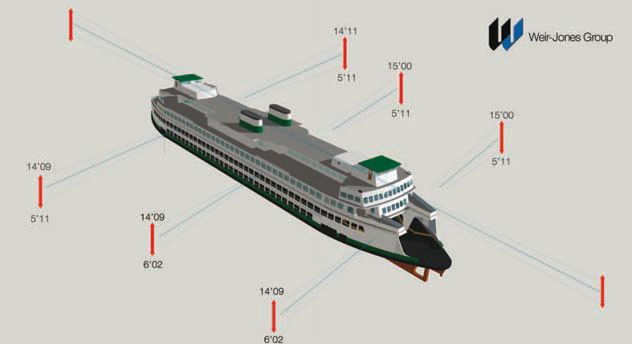 He envisions the smart device process will refine the system further, especially cutting down on response time to problems.

“Having to send a technician multiple miles and hours of transiting to get to a job that may only take 15 minutes, this is going to be a huge cost savings to the shipowners to just have it be done remotely,” said Hughes. “For us, we’re about four hours from Vancouver, B.C., but for someone that has to deal with a flight to get somebody there to check something, the wireless applications are a huge step in the right direction for using technology that’s available to us at this time.”

In addition to cutting down on time, ADIS can offer its users a cost savings. The system can interface with ballast control systems so water can move through the ship’s ballast tanks, balancing it to keep it at optimal trim, thereby optimizing fuel efficiency.

“There are a number of reports issued in papers out around the world now that talk about running vessels in ballast and trimming the vessels to the naval architects’ specifications with the least hydrodynamic resistance,” said Bodner. “The tests throughout the world have indicated that we could see anywhere from a 3 to 7 percent reduction in fuel burn if running in trim. So that means that ADIS can now be considered a true dynamic system and will allow the ballast control systems to make changes on the fly.”

“You can manipulate your loads, if they are not full loads, to best maximize vessel efficiency of hull shape by distributing the weight among it so you don’t have any hogging or sagging, or are heavy on one end or don’t have the most efficient profile, and that can actually save fuel for the vessels,” said Hughes.

The wireless features of the system work over a multitude of network solutions, including radio link, shipboard Wi-Fi or a cellular network. The system uses a series of ultrasonic sensors to monitor the ship from multiple locations. The transceivers and a data buffer repeatedly feed positioning data through an algorithm that calculates how far that sensor is from the water line. Since the sensors are spread throughout the vessel, the average of those data can show a master how the ship is sitting in the water plane.

ADIS can be used in virtually any conditions and in any kind of water, says Bodner, but to be effective, the transceivers have to be placed to cut down on saturation runoff, optimally no more than 40 or 50 feet above the water line.

In the future, Bodner says he envisions an ADIS system that is turnkey for newbuilds.

“We’re in the process of having some discussions with a major shipbuilder to incorporate this as an original equipment manufacturer, and we are also talking about doing large fleet retrofits with another client right now,” he said. “The desire would be to be so well known worldwide that it’s just demanded as a newbuild component.”