Journal of Commerce - Ground Freezing for utilities set to catch on in B.C.

The technique negates the need for ground water pumping or treatment, and freezing is limited to the project site, reducing risks to adjacent utilities and buildings. 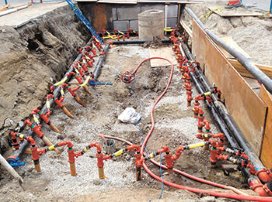 Construction crews used ground freezing for the first time in B.C. on a utility project for the Van Horne Sanitary Sewer project in Richmond, British Columbia.

Iain Weir-Jones, founder and chairperson of Weir-Jones Group, said this was Canada’s first use of potassium formate as a refrigerant.

“You would typically use calcium chloride, which is cheaper but highly corrosive and difficult to dispose of,” he said. “The refrigerant was completely non-toxic and can be reused.”

Probes in groups from three to six were connected to the supply and return headers in various locations and installed to form a continuous barrier around the freeze pit.

Site conditions made the project challenging—the existing 350 mm main was five metres below grade in a high water table, with high iron content in the ground water and weak soils.

An unstable four-storey block wall ran the length of the excavation site and a CP right of way formed the east boundary.

“By freezing, the excavation was completely supported, to the extent that CP could run heavy freight trains within six metres of the excavation,” said Weir-Jones.

The cost is mitigated when weighed against ground water treatment for pollutants.

“If they can’t discharge ground water, they do sanitary treatment, which is expensive and not always effective,” he said. “Normally sandy areas tend to be close to water and in those areas, ground water has to be plumed of contaminants.”

The company hasn’t yet worked in Canada, but has bid on a number of projects.

In specialty applications, ground freezing can offer a better option than conventional shoring methods such as soldier piles and lagging, or sheet piles coupled with dewatering, he said.

“Any case where dewatering is limited because of water supply, disposal or contamination issues, ground freezing can become a cheaper option. It works in areas with limited head room and where ground vibrations are a concern.”

A case in point is when the Port of Los Angeles needed to relocate existing water lines to allow for the deepening of the shipping channel between San Pedro and Terminal Island.

The work was completed using microtunnelling with receiving and jacking shafts located on either side of a salt water channel.

One shaft was located near the footings of a freeway bridge, another a few feet from a historic maritime museum.

Two others were in an active container yard and all four required excavations at least 90 feet below grade.

Soil Freeze installed five-foot-thick frozen soil shoring walls with inside diameters ranging from 14 to 22 feet, at 140 to 145 feet below grade.

After excavation, the general contractor’s jacking and receiving rings were poured directly against the exposed frozen soil of the shoring wall.

Freeze pipes were modified and relocated to give the microtunnelling machine clear access to penetrate the shafts.

Mageau, who said frozen ground is as strong as lean concrete and essentially impermeable, cites a lack of understanding as a main factor in the rare use of the technology.

“People often can’t get their heads around new technology, even though ground freezing has been used in construction since the 1880s,” he said.

“I used to work in Alaska where buildings are constructed on ice and permafrost all the time.”