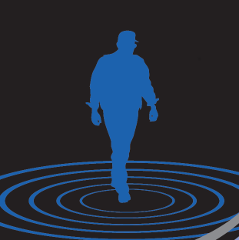 The Perimeter Intrusion Detection System (PIDS) draws upon more than thirty years’ experience in the field of acoustic event detection and location. The proprietary technology is utilized in our patented systems and used on a regular basis in the oil and gas, nuclear, and transportation sector.  PIDS operates on the basis that sound waves propagate at velocities that are characteristic of the surrounding soil, rock, or concrete. The difference in arrival times of an acoustic signal at three or more fixed detectors, geophones, whose position is known defines the location of the source.

Seismic sensors are installed at intervals along the perimeter of the area under surveillance.  There is no limit to the length of the perimeter; it can range from tens to tens of thousands of metres. The sensors are buried at a depth of 0.25 - 0.5m to pick up ground vibrations, and then the acquired data is processed by a computer to obtain the location of the source.

The operation of the Perimeter Intrusion Detection System can be summarized in the following steps:

Systems of this type need not be restricted to external perimeter applications. They could be used to detect excavation or tunnelling within or below a structure. The geometrical complexity of a multi-story building make the arrival time analysis more difficult, complicating the computation of the source location; however, given the appropriate input data, it is a solvable problem.